Yamas an Niyamas - and More

The yamas and niyamas are yoga’s ethical guidelines laid out in the first two limbs of an eightfold path. They’re like a map written to guide you on your life’s journey. Simply put, the yamas are things not to do, or restraints, while the niyamas are things to do, or observances. Together, they form a moral code of conduct.

Before I go into great detail about each of the yamas and niyamas, it is important to know more about yoga in general.  The practice of yoga is much more than going to the studio once or twice a week and practising yoga poses.  There is a philosophy behind each move and a belief system that governs the way to act and think.  These are called Sutras (or “threads”).  The Yoga Sutras, compiled more than 1,500 years ago by the Indian sage Patanjali, are the foundation of yoga as we know it today. In fact, they are the thread that connects the various schools and lineages of yoga.  In the sutras, Patanjali outlines the eight limbs of yoga, the eightfold path of spiritual growth and self-discovery. These limbs are ethical guidelines on how to live a vibrant, meaningful life, and they are just as relevant to contemporary practitioners as they were to the seekers back in the time of Patanjali.

Asana (yoga postures) is arguably the most well-known of the limbs, but it’s only a part of the story, for this path offers so much more. Each of the eight limbs addresses a different aspect of our being, and together they act as a road map to what is called “yoga off the mat.”

So, let’s begin with the yamas.

The five yamas, self-regulating behaviors involving our interactions with other people and the world at large, include:

Satya: truthfulness. The word ‘sat’ literally translates as ‘true essence’ or ‘true nature’. It also means something that is pure and unchangeable. ‘Sat’ also means ‘that which exists’, ‘that which has no distortion’, ‘that which is beyond time, space and person’, and it also means ‘fact’ or ‘reality’.
Being truthful isn’t just as simple as about being truthful in words. Satya is total commitment to truth— in being, in words, in actions, in intentions. The practice of this second yama of Satya requires deep understanding, a lot of awareness, and a delicate balance of honesty.  Basically truth is not what we speak, but who we are.

Here are five ways to practise Satya in our daily life.

1.       Be genuine and authentic.
2.       Speak the truth.
3.       Nurture relationships with skillful practice of Satya
There is a beautiful Sufi saying:
“Before you speak, let your words pass through three gates.
At the first gate, ask yourself ‘Is it true?
At the second gate ask, ‘Is it necessary?
At the third gate ask, ‘Is it kind?”
4.       Find the purpose in your life.
5.       Work at your own level and honour where you are each day without any judgments and opinions.

Here are some modern day ways to practise Asteya.

Brahmacharya: non-excess (often interpreted as celibacy).  Literally, Brahmacharya translates as “walking in God-consciousness.” Practically speaking, this means that Brahmacharya turns the mind inward, balances the senses, and leads to freedom from dependencies and cravings. Yogis tell us that when the mind is freed from domination by the senses, sensory pleasures are replaced by inner joy.
How can we apply Brahmacharya today?

In most cases, mindfulness and moderation are key to pursuing the “right use of energy.” Brahmacharya is about paying attention to how you use your energy in everyday life. It’s about providing your mind and body with what it needs – and enjoys – without going to a place of excess.

1.       Listen to your body.
Paying attention to what your body is asking for will naturally lead you toward brahmacharya. What does that look like in practice? Eating when you’re hungry, but not stuffing yourself. Resting when you’re tired, but not lying in bed all day. Exercising regularly, but not overtraining.
2.       Set limits.
Sticking to limits can also help us apply brahmacharya in daily life. For example, professional accomplishment is an important source of fulfillment for most people. But working excessively leads to burn out, so we need to set work/life boundaries.
Similarly, some amount of social media use can be beneficial. But we need to limit our time on it, so it doesn’t become excessive and mindless or move us away from our true selves. Using an app to connect with old friends is consistent with brahmacharya; scrolling through other people’s photos for hours on end is not.
3.       Look for balance.
Finding moderation can also mean striking a balance. For example, spending time alone and spending time with others can both be considered right uses of energy. But we need both. If you only do one or the other, instead of finding moderation, you won’t be getting everything your mind and spirit needs.

Aparigraha: freedom from greed, possessiveness, or covetousness. The following are ways we can incorporate Aparigraha in our everyday life.

1.       Let It Go. Possessions take up space and energy—in your head as well as in your home. So try this: Every time you buy something new, let go of something old—give it away, or toss it out. By letting go of things from the past, you can live more fully in the present.
2.       Breathe. When we get stressed out, we tend to hold our breath. This makes us even more anxious. Release the breath and allow it to flow fully and deeply. Then you will feel more relaxed, open, and spontaneous.
3.        Self-Care. When we are afraid and insecure, we may feel a need to cling to and control those who are closest to us. That rarely works. Instead, find ways to nurture and center yourself so that you feel independent and strong in your own right, and can allow others to be who they need to be.
4.       Be Positive. When we cling to negative thoughts, emotions, or memories, we spiral into destructive habit patterns. By replacing negative thoughts with positive ones, and by remembering your mantra, you create a harmonious space for yourself and others.
5.       Forgive. Let go of painful memories from your past. Free yourself by offering forgiveness to those who have hurt you and to yourself.
6.       Practice. Sometimes we try so hard to be perfect—in our asanas, meditation, contemplation—that we miss the essence of practice. Do your best and then remember to release—physically, mentally, emotionally. Let go and stay open to guidance from within.
7.       Be generous. Expand your capacity to stretch yourself. Share your time, your energy, your knowledge, your attention, your connections. Donate. Volunteer. Give in whatever way you can.

Posted by Rev.BonnieJasen at 22:39 No comments:

As a learning Reiki practitioner and a yoga enthusiast I have become very interested in chakras. According to Chopra.com, "the Sanskrit word Chakra literally translates to wheel or disk. In yoga, meditation, and Ayurveda, this term refers to wheels of energy throughout the body. There are seven main chakras, which align the spine, starting from the base of the spine through to the crown of the head. To visualize a chakra in the body, imagine a swirling wheel of energy where matter and consciousness meet. This invisible healing energy, called Prana, is vital life force, which keeps us vibrant, healthy, and alive." 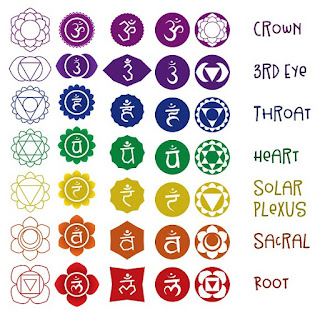 Muladhara (literally, “root support”) is located at the base of the spine. It is often depicted as a red four-petal lotus, and it’s connected to the earth element.

Muladhara governs what are considered the four primal urges: food, sleep, sex, and self-preservation. Its energetic function is to help us maintain a sense of groundedness and inner stability.

Root chakra affirmation: “I am connected to the earth. I am strong and I am stable.”

- ROOT LOCK:   The root lock, or Mula Bandha, is defined by B.K.S. Iyengar as "a posture where the body from the butt to the navel is contracted and lifted up and towards the spine." It is a technique used not only in asana practice, but in pranayama and meditation as well.

- poses that strengthen the legs, feet, and pelvic floor

Svadhisthana (literally, “her own abode”) is located at the pelvis. It is often depicted as an orange lotus with six petals, and it’s associated with the water element—fluidity, adaptability, creativity, emotions, sexual energy, and the unconscious. The second chakra’s energetic function is to help us regulate our emotions and desires, so as not to be driven by them.

Sacral chakra affirmation: “I am a creative being with unlimited potential.”

Manipura (literally, “city of jewels”) is located at the navel center. It is commonly depicted as a downward or upward-facing red triangle, and it’s associated with the fire element. Having a strong inner fire (agni) can help us digest not only our food, but also our life experiences.

Energetically, manipura’s function is to optimize our personal power so that we can navigate our lives with strength and determination. Manipura gives us the confidence we need to process and eliminate what does not serve us, and to let it go.

Navel chakra affirmation: “I am confident, powerful, and I can handle anything.”

Anahata (literally, “unstruck”) is located at the heart center. Anahata is typically depicted as a green six-pointed star surrounded by 12 lotus petals. On a spiritual level, it’s said to be the home of the higher/infinite, “unstruck” or indestructible self. Anahata is associated with the air element, and with emotional qualities such as peace, love, and openness. Energetically, anahata helps us tap into unconditional love.

Heart chakra affirmation: “Give love to receive love, and be love.”

Vishuddha (literally, “to purify”) is located near the base of the throat. It is often depicted as a blue downward-facing triangle inside a lotus with 16 purple petals. Vishuddha is associated with the element ether, or “space” (akasha), and with speaking one’s truth. Its energetic function is to help us find authentic self-expression.

Throat chakra affirmation: “I speak my truth. I live my truth.”

- expressive, devotional arts such as kirtan

Ajna (literally, “command center”) is located between the eyebrows. Represented by a transparent lotus with two white petals, it’s considered to be the seat of the mind, of conscious and unconscious awareness. It is not associated with any element, as this chakra is considered “beyond” the physical elements. It is held to be the center of intuition, vision, prophecy, imagination, inner knowing, and self-assurance. The energetic function of ajna chakra is to help us learn to know ourselves: emotionally, mentally, and spiritually.

Third-eye chakra affirmation: “I am open, intuitive, and self-assured.”

-  nadi shodhana (more about this later)

Sahasrara (literally, “thousand-petal lotus”) is located just above the crown of the head. Said to be the doorway into pure consciousness, it is often depicted as a thousand-petal lotus with a pinkish aura, and it is not associated with a physical element (as it too is considered to be beyond the elements). Sahasrara serves as a way of connecting to divine energy and is associated with our highest self. Sahasrara helps us function in a more enlightened way, cultivate self-mastery, and find a sense of connection with all.

Crown chakra affirmation: “I surrender to the wisdom of pure consciousness.”

Yoga practice for connecting with this energy center:

- the yamas and niyamas

Posted by Rev.BonnieJasen at 13:11 No comments: